Dry Weather to Remain an Issue for Farmers in 2013

Dry Weather to Remain an Issue for 2013

Although the moisture profile in many areas of the Eastern Corn Belt has certainly improved in the upper 18” of soil, there are still 509 counties in 13 states that remain categorized as disaster areas, as of February, 2013. Meteorologists are predicting those east of the Mississippi River will begin the year with adequate, short-term moisture reserves. However, despite the recent snows, widespread areas of the Western Corn Belt have not recovered from the record-setting drought that culminated in 2012.

Besides topsoil and subsoil deficits evident in the Western Belt, deep soil reserves remain depleted across much of the US. In a February 27 press release, University of Missouri Associate Professor of Soil Science, Dr. Randall Miles, reiterates that replenishing severely dry soils will take time. It may take as much as two years for the soils in the Midwest to recover from the drought. Miles says a significant amount of Midwestern soil is dry down to as deep as five feet and it will take time for moisture to move deeply into the soil where the driest conditions exist. Miles says one foot of soil typically holds two inches of water, and to completely recharge the soil profile would require about 16 inches of water above normal precipitation amounts. 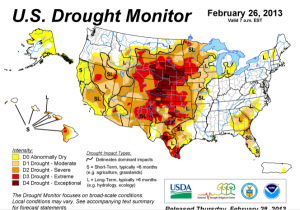 Although the devastating “La Nina” weather phenomenon has officially ended, and the Southern Oscillation Index is currently at a neutral measurement, it has not moved towards the beneficial “El Nino” weather pattern as scientists predicted. In fact, the NOAA (National Oceanic and Atmospheric Administration) expects drought to persist throughout May for much of the western half of the US, in addition to North and South Carolina, Florida, and parts of Virginia and Georgia. Furthermore, expectations are for above-average temperatures to surge across the US beginning in May. The complex composite of US weather models and NASA’s satellite data indicate extremely dry conditions across the Corn Belt in 2013 into the summer.

For a graphical representation of the last 116 years, please check out the NY Times Drought Footprint. The points are that the crop is not in the ground yet, and it takes years to recover from a drought with the magnitude of 2012. Predicting rosy, previous-trendline yields and benign weather resulting in major price declines may be a lovely, yet unrealistic dream for grain users, for 2013 in particular.  The livestock sector would be well advised to lock in supply needs while the market has removed the weather premium from current values.  We sit in the middle of expected price ranges for 2013, which makes it more difficult for Buyers and Sellers to take definitive marketing actions. Yet it would seem to me that current markets are trading in the lower third of the 2013-crop price range than the mid to upper price points.  It will get hot this summer as it does every year.  One difference this year is that much of the US is beginning with inadequate moisture reserves, which will make even average yields fully dependent on timely precipitation.  A few of us may enjoy rains exactly when we need them, but it is unrealistic to expect weather perfection in 2013 or any year across the grain belt. 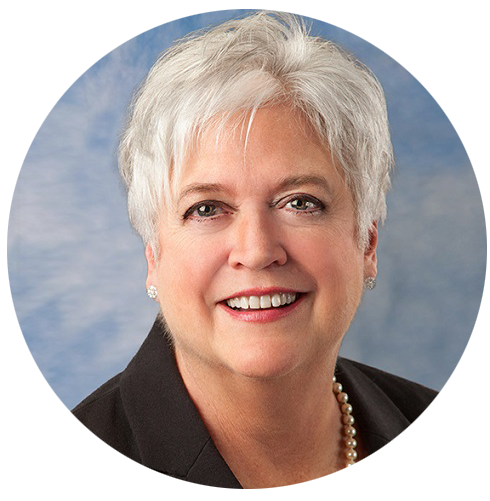